Sahara Field Production Limited (SFPL), a subsidiary of Asharami Energy, acquired a 16.2% participating interest in OML 18. In 2013, Shell Petroleum Development Company of Nigeria Limited and its joint venture partners divested its 45% participating interest in the onshore Oil Mining Leases ("OML") 18. The block which covers an area of 1,035 km2 is highly prolific, producing oil and gas from five (5) fields. The acquisition which was in the form of a competitive bidding process open to Nigerian companies culminated in the selection of the Eroton/Sahara/Bilton consortium as the winner of the OML 18. Sahara has since obtained Ministerial approval for the acquisition while Eroton was appointed as the operator of the block.

The terrain of the block is mangrove swamp and is heavily intersected by wide rivers and creeks. Field facilities are mounted on semi-submerged piled platforms and drilling requires a swamp barge.

OML18’s holds about 1.5 BOE reserves are found in ten fields, the largest being Cawthorne Channel, Buguma Creek and Orubiri. Extensive 3D seismic surveys with additional 4D seismic has been carried out on the Cawthorne Channel, Akaso, and Krakama fields.

Production commenced on OML 18 in 1970, reaching a peak of c. 120kbbl/d in 1971. Till date, 17 exploration wells have been drilled across the block resulting in ten oil and gas discoveries; seven fields have been developed, however, production is currently from five fields. OML 18 is located close to Bonny Terminal, the region’s main export hub, a world scale crude export facility owned and operated by the SPDC Joint Venture.

The significant gas resources and gas exploration potential of the block and the access to both NLNG and domestic gas market fit well with Sahara’s strategy and current investment in Nigerian Gas Master Plan and the power sector. 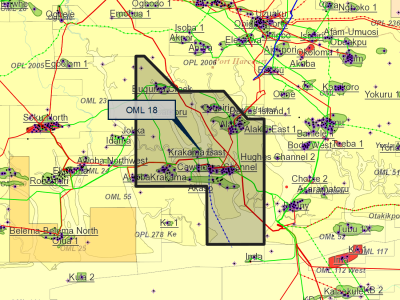