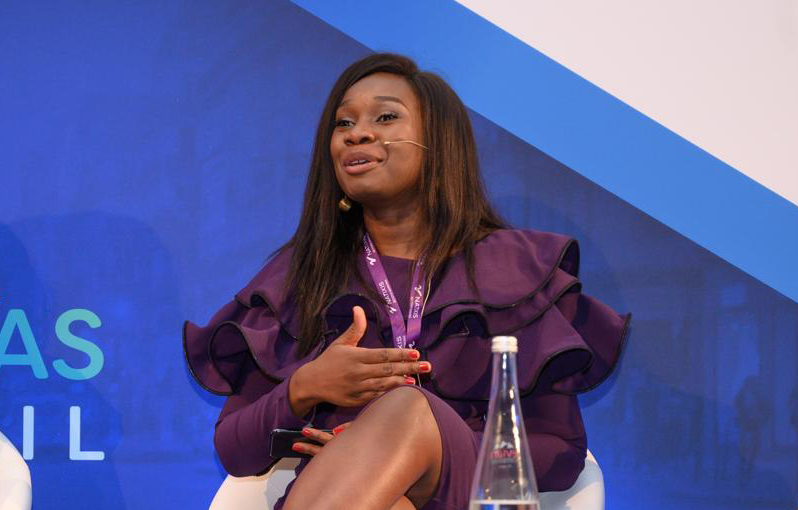 The programme has produced several leading young energy sector professionals across Sahara’s locations in in Africa, Europe, Asia and the Middle East. With over 10 years of experience in the industry, Mariah coordinates negotiations for the company’s Asset Acquisitions, Crude Handling Agreements, Sales Purchase Agreements, Unitization discussions, and Production Entitlement Reconciliations. She has an M.Sc in Energy Studies with specialization in Energy Economics from Dundee University, and a BSc in Economics, Finance & Management from Queen Mary, University of London.

Mariah was one of the panelists who addressed the theme: “Encouraging STEM Subjects to Balancing the Boardroom: Gender Diversity & Equality in the African Energy Industry” at the recently concluded Oil and Gas Council’s Africa Assembly in Paris.

In this interview, she shares details of her growth in the industry, her passion for mentoring younger women and highlights the need for gender parity at all levels in the energy sector.

What has your experience been as a senior manager at Sahara Group’s Upstream division?

I joined Sahara’s training program at the age of 22 with no prior knowledge or desire to work in the energy industry nor a STEM degree (my first degree was in Economics, Finance and Management) and after six months of hands on training within all the Sahara companies which cuts across downstream, midstream, upstream and operations, I was deployed to the upstream arm and asked to coordinate the next internship program simultaneously. These are the sort of opportunities and challenges you face working in a fast paced innovative company like Sahara.

The upstream sector of the Nigerian energy industry is a highly regulated and competitive one being that it accounts for over 90% of Nigeria’s GDP and as such this brings its own set of challenges to my role. However, I am able to work through problems and achieve solutions because the work environment at Sahara fosters innovation and employees are made to own the vision and given the freedom to be creative around solving problems.

I have been able thrive in the company because your contributions and successes are valued, recognized and rewarded regardless of gender, age or position.As I say to my colleagues; I don’t work like a man or a woman, I work like someone who needs to get the job done and that is all Sahara sees and that is what is rewarded.

In Sahara, you do not get passed up on a promotion simply because you are female and they fear your family obligations as a woman may conflict with your work obligations. In stark contrast, the company supports you in achieving those obligations so that you are able to better perform at your job and that performance never goes without reward!

What do we need to do in Africa to encourage the emergence of more women in the sector?

On a foundational level, the government and private sector need to encourage young girls to pursue Science Technology Engineering and Mathematics (STEM) degrees through workshops and organized school programs. To start with, many girls don’t even know the career options available to them in Energy industry, it is important to start at the school level to promote the various career paths available both through STEM and Non-STEM pathways because the Energy industry is bigger than just engineering.

Furthermore, younger girls need to see more female role models at the top so they know what can be achieved and be inspired to do more. It is hard to want what you cannot visualize so leading women have a duty to promote themselves more and share their stories with other women.

More critical than just getting women in through the door is retaining and promoting them, a study showed that at entry level there was 35% women participation in the industry but as it got to executive level the percentage dropped to 8%! So women are coming in but the companies are not retaining or promoting them into leading roles. As women, we need to know that there would be sacrifices to be made and the road to the top may not be easy when combined with our roles as nature’s chosen primary caregiver but it is not impossible, we need to use all the support we can get from family and friends and we should be willing to be flexible and think creatively around juggling our roles.If companies are really serious about getting more women in leading positions then they must adopt female friendly work policies such as nursing rooms, allowance for childcare, flexi work practices etc to support women and help them achieve their career goals without jeopardizing personal goals.

What would be your greatest achievement in the sector?

The interesting thing about being an intrapreneur in a company like Sahara is that the company’s successes are my successes and vice versa. Sahara was one of the first indigenous E&P companies to enter into the Nigerian upstream sector as far back as 2004 as an Operator (not just an ‘asset broker’ peddling off assets to IOCs with the technical and financial capabilities) and has grown its assets organically form exploration thorough appraisal, development and production.

I am proud to have been an integral part of its success today by way of Bid participation, government stakeholder engagements and commercial negotiations. I look forward to playing my role in making the company the pre-eminent indigenous producer in Sub-Saharan Africa by 2025 with production in excess of 100,000 barrels of oil production per day.

Having made my mark professionally in the sector, it would be my greatest achievement to reach young girls through sharing my experience and to drive the movement for gender parity at boardroom level in energy industry on a national level.

How do you intend to help younger women find their feet in the industry?

I started making a conscious effort to offer advice to younger girls within my immediate sphere of influence who want to pursue a career in the energy industry.I mentor some younger ladies in the sector. I will continue to strive for excellence in my career and share my stories, challenges and successes on a wide platform so that younger girls can have not just a role model to emulate in the energy sector but also a blueprint and relatable pathway to help them navigate their careers. It is important for women to know that it can be done despite gender specific challenges.

Where do you get the inspiration to keep up with the rigors of work in your sector?

The rewards and recognition for my contributions to company’s success certainly makes the countless late nights, early mornings and constant flying worth it but more than anything; I like to WIN! And winning does not come without sacrifice so that keeps me moving.

Why do think achieving Balance in the Boardroom is so important?

It is important not just because we should all have the same rights and opportunities regardless of gender. But also because a boardroom of 10 men of a similar age and similar background are likely to think in the same way and have the same ideas whereas a diverse group of gender, ages and backgrounds would produce innovative ideas that change the status quo and achieve the unthinkable. Furthermore, energy use is not gender neutral, women are more greatly affected by energy availability and policies than men yet you have 89% of men at helm of decision making in energy.

The struggle for gender parity cannot truly be achieved without a balanced boardroom because in some cases, even though the men have the intention of achieving a more gender balanced workforce, they would not know those policies that would help women. I recently spoke around some of these issues on a panel and gave an example of the introduction of a nursing room in Sahara, afterwards the CEO of a Nigerian Oil servicing company came up to me and said he was going introduce the same in his company because he didn’t realise something so small could have a great impact for women. It wasn’t because he was unwilling to support his female staff, he just didn’t know how he could because there was no female perspective at the decision making level.

What are some of the perceptions or biases in the Africa Energy Industry that hinder women’s entrance and/or growth and how do we overcome them?

There’s a dominating perception that the energy industry is for engineers and thus for men mostly, we need to also promote the non-technical but equally important career paths in the energy industry such as Legal, Commercial, Government Relations, Supply Chain, Business Development etc. Furthermore, many companies have a biased pay structure that favour the men and penalise the women for taking time off for personal/family issues and as such many women exit the industry mid-career because they feel undervalued.

The perception that the energy industry is reserved for men can be pulled down further if successful industry women put themselves out there a bit more so that younger girls have more role models.

We also need to realise that when we as women get to the top we don’t need to strip away our femininity or bury those female specific hurdles we had to jump and blend in with the men by replicating the habits of our successful male executives, the world needs our fresh feminine perceptive. We can’t keep sending the message that ‘we need to be men to succeed in this industry’ it discourages younger girls from pursuing this career line.

The perception that to be a successful woman in a male dominated field you must be unmarried or be a bad mother kills many women’s ambition and this perception could not be farther from the truth! According to William Domhoff; author of Women, African American Leaders of Fortune 500 companies, of the 28 women who have served as CEOs of fortune 500 companies, 26 of them were married for over 10 years minimum.

Mentorship and sponsorship in the workplace are important in reaching the top of one’s career however women are disadvantaged because unconsciously, people are drawn to mentor those that remind them of their younger selves so unconsciously men are drawn to mentor/sponsor younger men and the boardroom in the first place is full of men so no one looking out for the women. Men need intentionally overcome this unconscious bias and take up sponsorship roles for younger promising female talent in the industry and not just provide them guidance but also recommend them for opportunities when possible.

What is your advice to women in more junior positions?

Be intentional about your growth, be visible in the workplace, seek assignments and seize opportunities, join and be active in networks. The road to the top will not be easy or straightforward, stay determined, be flexible and creative in achieving balance between the home and workplace. It is not enough to be good at your job and sit quietly in the corner waiting to be noticed and whisked to the C-Suite, you need to break walls, smash windows and take a seat at the table because you deserve to be there, you are doing the world a huge favour by being there and remember that you really can have it all but just not at the same time so know when to pursue what.